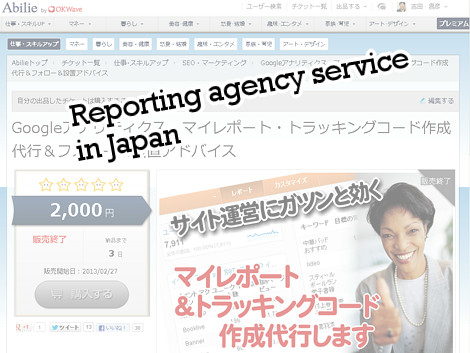 However, except for me, in Japan, the service does not start anyone yet.

I began to create my report services on behalf of the ‘Google Analytics’. It’s a service for the first time in Japan.

I was contracted for 2000 yen per 1 profile. At first it was very strong sell. 10 for recruitment, because I had sold out in three days on sale.

This is a business content. The notice of service on the site know-how sellers. The content of the site to make my report. Delivered and also customize the tracking code if there is a demand. A follow-up to the exchange of messages and indicators such as the view of the installation, via the site.

I believe this service was received, and I just received the request and without having to share Google Analytics reports for the site. Because the access log but do not want to show to others. As well as corporate compliance, but because the delicate part.

In Japan has been widely accepted as a reasonable price as well buy price of 2000 yen. Foreign analysts who are reading this article, it will be said to sell bashing. However, if it is the reality of the Japanese market access analysis. In particular, there is little about the Google Analytics needs. Broadband are popular, perhaps because it was the Japanese high literacy of the user from the old days.

And deliver my report and the tracking code and ends with the exchange of messages of roughly two or three times. However, there are cases in difficult. There was only able to because they do not hear much of the site URL, the variable tracking code was developed, or have been originally used in the site, such as batting or any other plug-in.

These would be issues that arise as well, perhaps in the tag manager. I wonder how you’re overcoming overseas. I would be very concerned about.

My index you want to see in the report is different depending on the site. There is no waste indicators you want to see the action, is to ask a professional. Personnel to the site that will think that way, the more I’m going to continue this service in the future.